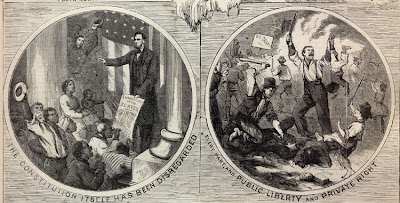 Robert Oliver, the Managing Editor for the San Diego Times wrote a commentary for Black History Month raising the question whether or not the Democratic Party should apologize for supporting slavery.

In his Times commentary “Should the Democratic Party Apologize for Supporting Slavery?” Oliver makes it clear that he is not a Republican.

I’m an African-American political independent. The purpose of this article is not to debate the merits of belonging to a certain political party; nor to pursue political converts. The purpose is to clarify history and to ask does the Democratic Party owe African Americans an apology for
past support of slavery and racism?

He also goes on to present some very specific evidence:

• Look at a portion of the 1860 platform: “That the normal condition of all the territory of the United States is that of freedom; That as our Republican fathers, when they had abolished slavery in all our national territory, ordained that ‘no person should be deprived of life, liberty, or property, without due process of law,’ it becomes our duty, by legislation, whenever such legislation is necessary, to maintain this provision of the Constitution against all attempts to violate it; and we deny the authority of Congress, of a territorial legislature, or of any individuals, to give legal existence to Slavery in any Territory of the United States….That we brand the recent re-opening of the African slave- trade, under the cover of our national flag, aided by perversions of judicial power, as a shame to (a) crime against humanity and a burning (for) our country and age; and we call upon Congress to take prompt and efficient measures for the total and final suppression of that execrable traffic.”

•According to the PBS’s American Experience it says of the Democratic Party platform in 1840: “They opposed the government’s interference with the spread of slavery.” It also said in 1852: “Democrats also supported the provisions of the Compromise of 1850 and united along pro-slavery lines.” It also said in 1856: “Democrats again united along a pro-slavery platform, endorsing states’ rights, the Fugitive Slave Law, and popular sovereignty in the territories.

•The PBS website on “The Rise and Fall of Jim Crow” said: “The Democratic Party identified itself as the ‘white man’s party’ and demonized the Republican Party as being ‘Negro dominated,’ even though whites were in control.” Some Democrats formed the terrorist organization the Ku Klux Klan in the 1870’s. An article in the 1992 Encyclopedia Britannica under the “Reconstruction” heading reported: “The Democratic resentment led to the formation of the secret terroristic organizations such as the Ku Klux Klan and the Knights of the White Camilia. The use of fraud, violence, and intimidation helped Southern conservatives regain control of their state governments.” Blacks and White Republicans were the targets of the Klan’s wrath.

• Republican Senator Trent Lott was nothing to shout about. (Same for the late Democrat Dixiecrat turned Republican Strom Thurmond). Lott was pilloried by the media after his remarks praising a Thurmond Dixiecrat presidency. However, Democratic Senator Robert Byrd said on national television, “There are white niggers.” I have not heard any cries of protests from recognizable Black leaders and politicians. (You know who they are.) It was reported that Senator Carol Mosely Braun excused him by saying that he was just “an old man.” An older Black man I knew who hated, with venom, White and Black Republicans also defended Byrd! By the way, Senator Byrd was a member of the Ku Klux Klan, the “Invisible Empire of the South,” years ago. He even recruited for the Klan as a “kleagle.” What if Trent Lott was an ex-Klan member and said “white niggers” on national television? We would have shouted “Crucify! Crucify!” right? We would have tarred and feathered him and ran him out of town. Was it because Byrd is a Democrat that we make excuses for him making racial slurs that no Republican could get away. He can get away with being a ex- Klan member while we tell the Republicans to “come clean”? Is not that “selective outrage” dysfunctional if not hypocritical?

• Rev. Sharpton said we never got our “40 acres and a mule.” Yes, we did, and they were taken away by a Democrat. Reparations to Black slaves were discussed by Republicans after the Civil War. Political activist and researcher M.D. Currington (websites: www.mdcurrington.tripod.com/mdc and http://www.moteandbeam.tripod.com/) writes, “On January 12, 1865, General William Tecumseh Sherman and Secretary of War Edwin M. Stanton met with twenty Black community leaders in Savannah, Georgia to discuss freedom and reparations for former Black slaves.…on January 16, 1865, General Sherman issued Special Field Order No. 15, which set aside 7,600 square miles in a 30-mile wide tract of land along the Atlantic coast stretching from Charleston, South Carolina to St. John’s River near Jacksonville, Florida, for the exclusive settlement by Blacks…This Field Order also guaranteed former slaves U.S. military protection, 40 acres of tillable land per Black family, other provisions such as a mule or horse in order to work the land, and any other animal that was no longer useful to the military. By June 1865, over 40,000 former slaves were settled on 40-acre tracts of land. Over 400,000 acres were allocated. In September of 1865, Democrat President Andrew Johnson reversed Field Order No. 15, issued special pardons, and returned the land to former slaveowners.” The Republicans gave, yet a Democrat took it away.

None of the information presented here is new to me, or to David. The fact is that the Democratic Party and much of what it stands for have much of its roots in racism against Blacks. Unions were originally founded by northern whites to keep newly freed black slaves from taking their jobs. Planned Parenthood’s founder, Margaret Sanger was a believer in and promoter of eugenics. She spoke to groups like the Klu Klux Kan about the same theories of population control that inspired Adolph Hitler. And the gun control movement that Democrats are so proud of was at its root an effort to disarm African Americans who might demand that their civil rights be honored, by any means necessary.

So the fact that the Democrat Party fought against ending slavery, instituted Jim Crowe laws and fought against the civil rights of blacks should come as no surprise. But I am surprised that Jessie Jackson, Al Sharpton, Julian Bond or any of the other “civil rights leaders” have never publicly demanded that the Democrat Party officially apologize for its support of slavery and racism.

But then again, that would mean that they would have to acknowledge that it happened in the first place. And that would kind of mess up their version of history.

Should Democrats apologize for its support of slavery and Jim Crow segregation? Unequivecably, YES! But the Republicans should also apologize, because they were the ones who sold out Blacks in the south during reconstruction in 1876 with the “Great Compromise” – the Republicans get the White House while federal troops were removed from the former Confederacy at a critical time – leaving Blacks to suffer in a Jim Crow society for another 100 years. The Republican Party oppose affirmative action. And the Republican Party endorses and utilizes wedge issue politics and questionable practices(e.g. Willie Horton) to win elections.

The problem here in America is that we continue to refuse to address the legacy of slavery and racism that still impacts our nation. If you believe that the past is the best predictor of the future, then African American mistrust of government – regardless of which party is in power – is well founded. BOTH parties have at times supported and opposed the progress of African Americans.

The real issue is that until we sufficiently address the legacy of our past as a nation, the future of African Americans will continue to be in question – regardless of an “apology”. Michelle Obama hinted at the quandry facing Blacks in her oft-quoted statement, “for the first time in my adult life, I am proud of my country.” Black Americans are indeed patriotic, but as Ms. Obama’s comments reveal, there is also an underlying mistrust and frustration with our nation. And until we as a nation address the roots of this mistrust, we (every American) will not get past this discussion.

You are right about the “Great Compromise”. That is why I fight so hard to not allow our party to compromise our values again, simply to gain or maintain power. But because I do that, you would call me a close minded ideologue.

But let us not forget, it was the Democrats who were the perpetrators of the evils that went on during this time.

On another note: Does saying that re-electing President Bush is akin to dragging a black man to death behind a truck is not promoting a wedge issue? What about calling President Bush “…our Bull Connor”? How about forcing our children to stay in failing schools, calling those who believe in enforcing our immigration laws “bigots” or pushing tax increases on the wealthy? These are all wedge issues that Democrats love to use.