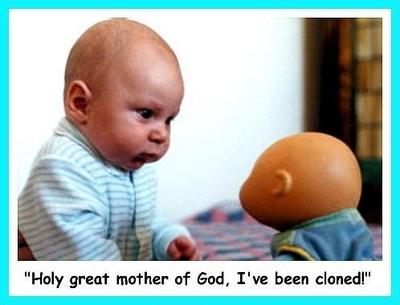 As cloning advocates across the world celebrate the first ever cloning of a dog. I can’t help but wonder. If they were willing to sacrifice 1094 dogs to create one cloned dog, how many human babies are they willing to offer up on the alter of scientific research?

The process of dog cloning remains highly inefficient, a reflection of how much scientists still have to learn about how to make mammalian offspring from single parents and without the help of sperm. Multiple surgeries on more than 100 anesthetized dogs and the painstaking creation of more than 1,000 laboratory-grown embryos led to the birth of just two cloned puppies — one of which died after three weeks.
They are not doing this research because they are interested in cloning animals. The truth is they are working their way of the latter to eventually clone human beings. Just notice how concentrated their efforts have been on cloning mammals.

“Dogs are really good models for biomedical research,” said Mark E. Westhusin, a researcher at Texas A&M University who a few years ago abandoned a costly effort to be the first to clone a canine.

Scientists have cloned mice, cows, sheep, goats, rabbits, cats and a few other mammals since Dolly the sheep — the first cloned mammal — was born in 1996. But dog cloning has proved a formidable challenge, largely because of inefficiencies that result from the dog’s quirky reproductive physiology, Westhusin said.

And while I rarely agree with PETA, their position on this issue is right on.

“The cruelty and the body count outweighs any benefit that can be gained from this,” said Mary Beth Sweetland, a vice president at People for the Ethical Treatment of Animals in Norfolk.
Let’s be sure to remember that statement when we start talking about human babies.