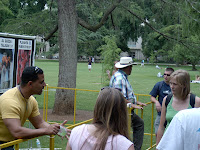 One of the most exciting and inspirational events I have ever had the privilege of participating in took place a couple of weeks ago. The Genocide Awareness Project (GAP) is designed to spur discussion about the tragedy of abortion came to UC Davis. And I was blessed to be on hand to minister to and talk with UC Davis faculty, staff and students.

The Center for Bio-Ethical Reform sponsors The Genocide Awareness Project (GAP) which is:

… a traveling photo-mural exhibit which compares the contemporary genocide of abortion to historically recognized forms of genocide. It visits university campuses around the country to show as many students as possible what abortion actually does to unborn children and get them to think about abortion in a broader historical context.

I know what you are thinking… “Oh great!!! Another Christian, right-wing whacko carrying around disgusting abortion pictures making us ‘Sensitive’ Pro-lifers look bad!” Well nothing could be further from the truth. Those who organize the GAP make every effort to create a positive atmosphere for discussion and dialogue.

It is our policy to treat everyone who approaches the GAP display with respect. We do not yell or use amplified sound. CBR holds staff and volunteers to strict rules of engagement. We know that the images we display are not pleasant. They represent an injustice of such magnitude that words alone fail us. Until injustice is recognized, however, it cannot be eradicated. We place our images in the public square because it is the last mass-media venue available to us. For all the people who will not take the time to be educated about abortion themselves, we bring the education to them.

As a matter of fact, every volunteer must sign a code of conduct before being allowed to participate in the project. It stated that we were not allowed to shout at people or force them to look at the photos. We also were not allowed to bring up religion, unless asked specific questions relating to the topic. But I will tell you, there was plenty of discussion and almost all of it was positive.

There were several people who came by simply to share their disgust at the pictorial. My question to them was, “Are you disgusted that these atrocities were taking place or that we are showing them to you?” And almost always they were upset that we were showing them the abortion pictures.
The reality is that abortion advocates and the mainstream media have done thier best to sanitize the issue of abortion. For example, they call the unborn child a “fetus” in order to dehumanize it. It is funny how they will show you all kinds of gore and violence on TV and then get upset when you show them actual pictures of babies that have been aborted.

One of the pictorials showed the picture of a child who was born prematurely (24 weeks) next to a child that had been aborted during that same stage of the pregnancy (24 weeks). The only difference between the two was that one was wanted by their mother and the other was not. The caption of that one was “The Insanity of Choice!”

I made it a point to share that while I realized that these pictures were upsetting, we were not responsible for what was in them. These photos displayed the reality of abortion… A reality that Planned Parenthood and others in the abortion industry don’t want people to know about.

It was amazing how misinformed many of the folks I spoke with were. One student could not believe that abortion was legal past the first trimester. And when I shared how partial-birth abortions are performed, many of the abortion supporters even had to agree to that it was a barbaric procedure.

And then there were those who were simply in utter denial. One onlooker admitted that he believed a parent’s right to choose should even extend to after the child was born. Another, when confronted with statistics demonstrating the disproportionate number of abortions performed in the Black community, made the statement that most young Black men are in prison anyway. So it was probably a good thing. This was a left-wing, liberal white woman saying this!

There were also those whose perspective on abortion was clearly altered as a result of the discussions that took place. It was hard to look at pictures of 8 and 10 week old aborted children (most of which had visible hands, feet, eyes, etc.) And not at least question whether or not it was a child. And our plea to them was “that if there is any doubt, shouldn’t error on the side of allowing the children to live?”

Person after person shared their personal testimony of how they, their girlfriend or a friend toiled through the process of having an abortion and the devastation it caused in their lives. They said that if they had known the whole truth, they might have made a different decision. In love, we let them know that many of us have made that mistake because we simply didn’t know. And that is why we were there, so that they could be exposed to the information that the abortion industry has intentionally hidden from them.

Most encouraging was the overall response by the students at UC Davis. With very few exceptions, they were gracious, respectfully inquisitive and even those who did not agree with us treated us with respect and recognized our right to freely express our views in the public square.

The folks at UC Davis were class acts and I for one would like to thank them for being so hospitable.