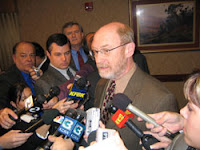 So much for working hard to solve the budget. According to the following press release from the CRP, the Chairman of the Assembly Budget committee John Laird (D- Santa Cruz) decided to go to the Democratic National Convention.

Democrat Budget Chair “Cringes” When Caught By Reporters At Convention

“It is time for every Californian to take action. Tell the Legislature that they need to pass the budget now.” – Assembly Democrat Caucus budget website

As California enters its 55th day without a state budget, assembly Democrats are urging Californians to call their Legislator and tell them to immediately pass a budget.

That could prove to be difficult, however, because the Democrat Chair of the Assembly Budget Committee, Assemblyman John Laird (D-Santa Cruz) is partying it up in Denver at the Democrat National Convention.

Despite a late budget that has hurt many Californians, Laird doesn’t seem to be worried. In fact, this morning he was found leading chants of “we are one!” at a convention breakfast. (Source: Capitol Weekly Blog)

How can Assemblyman John “What Me Worry?” Laird abandon his duty as Chair of the Budget Committee during our fiscal crisis?

There are 14 Southwest flights from Denver to Sacramento today…the people of California expect Mr. Laird to be on one of them.