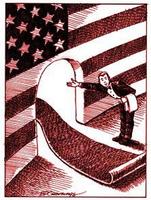 A recent study by the Pew Hispanic Center demonstrates the outcome of allowing a free flow of illegal immigration and providing added incentives not to obey our immigration laws. Potential immigrants are forgoing the legal process and just coming on in.

“The U.S. economy was obviously a very important factor in determining these flows,” said Roberto Suro, director of the center and a co-author of its immigration study.

“We’ve seen a fairly steady growth in the number of undocumented immigrants living here, and this data shows very sizable numbers coming in,” demographer Jeffrey Passel said. “We’re clearly not stopping them at the border.”

Declines in legal immigration “appear to reflect processing backlogs, security delays and other developments that followed the Sept. 11 attacks,” the report says.

The report documents immigration levels from 1992 to 2004.

The Pew Hispanic Center is a nonpartisan research group supported by the Pew Charitable Trusts.

I would venture to say that as long as we are rewarding people for illegally coming to this country, legal immigrants feel penalized for bothering to follow the rules. It reminds me of a sad incident that happened with my kids a few years ago at an Easter egg hunt.

It was a huge event held annually in a public park. The kids were divided into age groups and instructed wait until the whistle blew to start searching for eggs. Organizers made it very clear as they shouted instructions over a bullhorn that running was not allowed.

Well I am sure you can guess what happened as soon as the whistle blew. Kids took off running like “bats outta hell.” Meanwhile parents made spectacles of themselves as they shouted and egged their kids on to run . But my kids, having been taught respect for authority and the importance of following the rules didn’t run. Guess how many eggs they found? Zero!

What lesson did society teach my kids that day? There is no benefit to following the rules. Especially, if there is no punishment for breaking them.

Why should someone go through a cumbersome legal process to come to this country when they can get the same reward by just walking across the boarder? And as long as we continue to offer free healthcare, welfare, food stamps and free education to those who enter this country illegally, why should prospective immigrants bother to obey the law? And we will only further exacerbate the problem by expanding benefits to include government funded student loans, low interest home loans and driver licenses to illegal immigrants.

All the above should be benefits afforded only to those who respect and honor our laws.
And the only way to do so is to obey them. All the blessings and opportunities this country has to offer should be available to those who follow the rules.

After the debacle at the park I took the kids home and we had our own Easter egg hunt. And to show them how proud I was that they followed the rules, instead of candy in the eggs…. My kids got cash!

I wanted them to know that it pays to do the right thing.