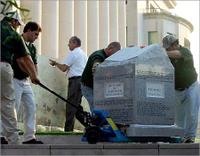 All the headlines today are reading “Ten Commandments Unconstitutional!” But the truth is that the Supreme Court has once again failed to truly take a stand on yet another moral issue.

According to an AP report in the San Francisco Chronicle:

In a narrowly drawn ruling, the Supreme Court struck down Ten Commandments displays in courthouses Monday, holding that two exhibits in Kentucky crossed the line between separation of church and state because they promoted a religious message.

The 5-4 decision, first of two seeking to mediate the bitter culture war over religion’s place in public life, took a case-by-case approach to this vexing issue. In the decision, the court declined to prohibit all displays in court buildings or on government property.

In other words, the ruling did not strike down all displays, only the ones in Kentucky; and as a result, any displays that are significantly similar. But they refused to address the issue of whether such displays are, by their very nature unconstitutional.

The justices voting on the prevailing side Monday left themselves legal wiggle room on this issue, however, saying that some displays — like their own courtroom frieze — would be permissible if they’re portrayed neutrally in order to honor the nation’s legal history.

So what exactly constitutes “neutrally”? Who determines whether a display steps over the line? The ambiguity of this decision has left a wide open door for liberal anti-God groups like the ACLU and spineless (sometimes anti-God) government entities to set the standard. Basically, the ACLU will sue and municipalities seeking to avoid costly litigation will fold. And thus the standard will be set.

A broader ruling than the one rendered Monday could have determined the allowable role of religion in a wide range of public contexts, from the use of religious music in a school concert to students’ recitation of “under God” in the Pledge of Allegiance. It is a question that has sharply divided the lower courts in recent years.

But in their ruling Monday, justices chose to stick with a cautious case-by-case approach.

This “cautious” approach is basically a refusal by the Supreme Court to take a stand. Either our Country was founded on Christian Principle or it wasn’t. And either it is appropriate for this fact to be publicly acknowledged, or it isn’t.

America is still waiting for an answer!