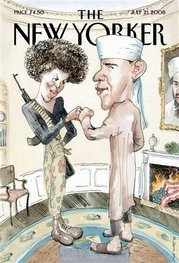 Senator Obama has responded to the questionable cover art published by the New Yorker Magazine.

In a statement Monday, the magazine said the cover “combines a number of fantastical images about the Obamas and shows them for the obvious distortions they are.”

“The burning flag, the nationalist-radical and Islamic outfits, the fist-bump, the portrait on the wall? All of them echo one attack or another. Satire is part of what we do, and it is meant to bring things out into the open, to hold up a mirror to prejudice, the hateful, and the absurd. And that’s the spirit of this cover,” the New Yorker statement said.

The cover depicts Obama wearing sandals and a turban, his wife Michelle toting a machine gun and Afro, in front of a portrait of Osama Bin Laden hung over a fireplace with a burning flag.

I get the satire. The cover is so absurd that its supposed to spark debate and teach the neanderthals that Obama is pro-American, patriotic, non-threatening to white people, blah, blah, blah.

The problem is that most people won’t get it.

Its satire of lies, and if most people do not understand that its a lie that Obama is Muslim; that he supports Osama Bin Laden; that he is somehow UN-American, how are folks supposed to ‘get it’ all of a sudden?

Nope. People will look at the cover and it will simply confirm their unfounded suspicions of the Obama’s.

I do believe that this is just a blip on the radar for the Obama’s, and the Senator and his wife (and those within their campaign) better develop some very thick skins quickly. They need to take a page from the Jackie Robinson textbook for dealing with racial stupidity… they cannot win fighting every single affront and offense, and must continue to “rise above it” and address it strategically.