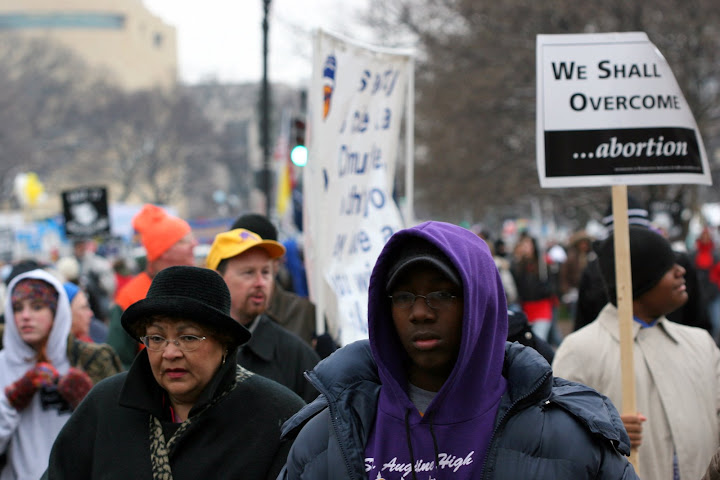 For those of you who have not heard about the tragic slaying of Oscar Grant and the ensuing protests and unrest that has followed, let me tell you that it is truly a sad tale. We should all pray that justice is done in this case.

But I am even more saddened that these same protestors and politicians continue to allow 1,200 African American Children to have their lives snuffed out every day. Our children are targeted for profit. The politicians hold ceremonies honoring the slaughter of our children. Heck, the government is the single largest financial supporter of this killing spree! I’m talking about the #1 killer of African Americans: more than three times Aids, violent crimes, accidents, cancer and heart disease all put together… I’m talking about Abortion.

Next week liberals will be falling all over themselves praising the passage of Rove v. Wade, the landmark Supreme Court Decision which declared a woman’s right to an abortion to be a constitutionally protected right. However, they will fail to mention that a black baby is now more than three times as likely to have their life taken in the womb than a white baby or that since 1973, abortion has reduced the black population by over 25 percent. How about this one- Every three days, more African-Americans are killed by abortion than have been killed by the Ku Klux Klan in its entire history.

These statistics are no accident. Rather, they are the result of an ongoing effort at population control better known as Eugenics. Planned Parenthood’s founder, Margret Sanger herself recruited black pastors to help market abortion in the black community. “We do not want word to go out that we want to exterminate the Negro population, and the minister is the man who can straighten out that idea if it ever occurs to any of their more rebellious members (November 1939 memorandum entitled “Suggestions for the Negro Project,”).
I don’t offer this commentary to downplay the tragedy of what happened to Oscar Grant. But while we are all fighting to make sure that such an outrage never occurs again, maybe we could do just a little something to stop a practice that is even more outrageous. No matter how you feel about a woman’s right to choose, this attempt to thin out the population by targeting black babies should have you up in arms.
Maybe if we captured these deaths on a camera phone, people would take notice that Plan Parenthood has achieved what the KKK could only have dreamed of!
For more information go to BlackGenocide.org