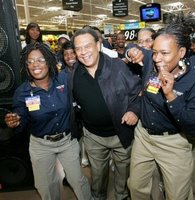 Former aide to Dr. Martin Luther King and two-term Atlanta Mayor Andrew Young is now working for Walmart as a paid corporate cheerleader. And while I know he’s getting paid, at least he is working for the good guys.

At the grand opening of a Wal-Mart in a black suburb of Atlanta, civil rights leader Andrew Young danced with store clerks, bouncing to the song “We Are Family.”

He also posed with a $1 million check from the company — a donation for a memorial to the Rev. Martin Luther King Jr. to be built on the National Mall in Washington.

Young took part in the pep rally in his new position as a paid corporate cheerleader for Wal-Mart — a role that has perplexed some of his longtime civil rights colleagues, who have all but accused him of going over to the enemy.

Once again, a black man decides to stray from the liberal path and other blacks are quick with the verbal lynching.

The Rev. Joseph Lowery, known as the dean of the civil rights movement, said Young — the 74-year-old former Atlanta mayor and U.N. ambassador — is acting as a “lone wolf” in working for Wal-Mart.

“Maybe he knows something that other advocates for economic justice don’t,” Lowery said in a statement.

I’ll tell you what he knows…. People can’t shop at stores that union bosses have helped close down. And oh yeah… People also want to work!

On Wednesday, Young hugged customers, signed autographs and posed for pictures with local dignitaries while singing Wal-Mart’s praises. He cut the ribbon at a store that replaces an abandoned Kmart that closed two decades ago in the mostly black neighborhood.

The new store has received more than 8,000 applicants for 500 jobs. Young said he expects new housing and more business to follow Wal-Mart’s lead and come to the suburban area that is home to some of the country’s most affluent blacks but has stagnated in attracting jobs.

This same sort of response occurred at a Walmart just outside the City of Chicago where 25,000 people applied for 325 jobs. And just like those who are attacking Young, the liberals on the Chicago City Council refused to support Walmart and refused to allow the store to be located within the city, despite the fact that they were providing much needed jobs and generous philanthropy to the community. I guess towing the union line is more important than helping the community or helping people poor people find jobs.

But I have one question…. If Walmart is so abusive of their employees, why are so many people (in liberal communities mind you) flocking to work for them?