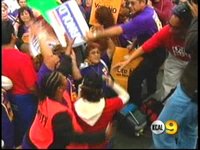 I just got this video clip via email and had to post it. It shows the true nature of the liberal left and the violent tactics that unions use against anyone who disagrees with them.

Public employee union activists showed the utter hypocrisy of their campaign against the special election initiatives on Thursday at a rally in LA’s Pershing Square.

While $115 million has been spent by public employee unions to oppose the reform initiatives and promote a message that the voices of their members will be silenced if Prop 75 passes, an angry mob of dues paying union members showed what little respect they have for free speech.

“A single Schwarzenegger supporter struggles to hold her ground in a rally against the governor’s special election initiatives. Opponents tried to hit her with their signs and some blocked news cameras as she argued her point. The crowd turns quickly, grabbing her signs and tearing them up. Even a woman wearing an orange security vest rips up the “Vote Yes” signs.” (CBS 2 News, October 28, 2005)

Two Los Angeles television stations caught on tape a hyped up mob of union activists intimidating and roughing up a woman who had the courage to speak out in favor of the four reform initiatives.

Whipping the crowd into a frenzy was none other than Speaker Fabian Nunez, who was a featured speaker at the rally in Pershing Square. At the very least, Nunez – a former union organizer himself – has a duty to issue a public apology to this woman on behalf the union bosses who control him. That is, unless the Speaker believes that violence and thuggery are acceptable forms of public expression.