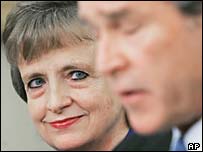 I haven’t commented at all on the nomination of Harriet Miers to the Supreme Court, because I really wasn’t sure what to think of her. Like many, I was hoping that something… anything would come out to shine light on her candidacy and explain why President Bush thought she was a good choice to serve on the Supreme Court. That something never showed up. That ace in the hole was never played. And now that Miers has withdrawn her name from consideration, one is left thinking….Why did President Bush set Miers up to failure?

How could he (or his staff) not foresee the eventual challenges that Miers would face? While no one of the knocks against her was enough to thwart her confirmation; all of them together were too much to ignore. She’s never served as a judge. She has little to no experience in constitutional law. Nothing in her resume, as impressive as it was, stood out as uniquely qualifying her to serve on the highest court in the land. And she has not written one thing that could be considered demonstrative of super intellect or understanding of constitutional law.

Then there are all the debacles that have taken place since her nomination. There was her declaration that Warren Berger, who voted in favor of Rove v. Wade was her favorite Supreme Court Justice, the anemic job she did of selling herself in individual meetings with Republican Senators and the fact that she did so poorly on her senate questionnaire that they had to give her a second shot at it. It was all so bad that I had to ask myself, “What was the President was thinking?”

The truth is…I really don’t know. I wish I could intellectualize for you the White House’s strategy on this nomination. But I can’t for the life of me figure it out.