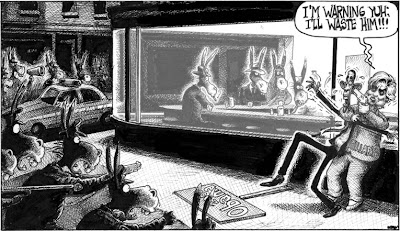 Everyone, including those who support Hillary Clinton are wondering just how far she will go to before she realizes that she cannot win the Democratic Presidential nomination. Many thought that tomorrow’s final two primaries would signal the end of her 2008 campaign.

Well according to politico.com this may not be the case. This afternoon they are reporting:

We can’t get her to sit down and talk,” the Hillary Clinton person was telling me. “We have been having a hard time getting her to stop campaigning long enough to talk about how she actually ends this thing.”

It is understandable. She has been campaigning for so long. She has fought so hard. And, let’s be fair, in recent months she has done so well.

As much as Obama would like to have the delegates won in these final two primaries put him over the top. Unfortunately for him, he will still need to capture about 30-40 more super delegates making him the first Democratic Presidential Nominee since George McGovern in 1972 to win the nomination without winning the popular vote. This very relevant fact is the final thread upon which the Clinton machine will hang their far-reaching hopes of victory.

The only question left to ask is whether or not the fight will go to the DNC convention in August. If Hillary has anything to say about it, I would look forward to a spirited convention battle.