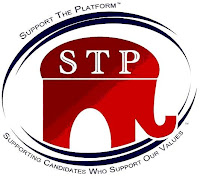 (Sacramento) – Limited government, lower taxes and family values are just a few things that voters usually associate with the Republican Party. But recently, elected Republican officials have been actively taking positions against these bedrock Republican values and have supported efforts to increase minimum wage, driving up unemployment; proposed a tax increase on homeowners to pay for fire protection that they are already paying for; and fighting against an effort to protect the definition of marriage, as between a man and a women. Some say you can hardly tell the Republicans from the Democrats these days.

STP’s efforts will start with the upcoming June primary where efforts are under way to elect their slate of candidates to the GOP Central Committee. Additionally, they are asking other Republican candidates to sign the “STP Pledge” declaring their commitment to support Republican values as outlined in the California Republican Party Platform. They also have launched a website SupportThePlatform.org to provide readers with up to date news and information on Republicans running for office in Sacramento County and where they stand on the issues important to Republican voters.

According to DeLuz, “We will be on the radio, on the web and in Republicans’ mailboxes letting them know there are still Republicans out there who believe in the values that make this Nation great.”