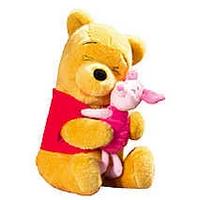 In order to avoid offending Muslim co-workers, those who work in Dudley Council, West Midlands are prohibited from displaying toy pigs; including the popular Winnie the Pooh and Piglet dolls.

NOVELTY pig calendars and toys have been banned from a council office — in case they offend Muslim staff.

Workers in the benefits department at Dudley Council, West Midlands, were told to remove or cover up all pig-related items, including toys, porcelain figures, calendars and even a tissue box featuring Winnie the Pooh and Piglet.

Bosses acted after a Muslim complained about pig-shaped stress relievers delivered to the council in the run-up to the Islamic festival of Ramadan.

Muslims are barred from eating pork in the Koran and consider pigs unclean.

At least they are also banning muslim extremists…