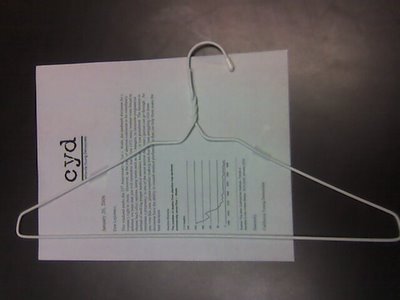 The California Young Democrats with a coat hanger and a smile visited the offices of California State Legislators to deliver a message celebrating the fact that the number of abortion related deaths has decreased since the passage of Roe v. Wade. But what they don’t mention is the fact that over 45 million babies have been killed in the process.

Their message, which was taped to the coat hanger stated:

This weekend marks the 33rd Anniversary of Roe v. Wade, the landmark decisions for a woman’s right to chose. However, as the topic of abortion continues to be relentlessly debated, we hope that you will remember that before 1973 many women were force to choose back-alley options, using items such as coat hangers, to terminate pregnancies instead of seeking proper medical assistance because it was prohibited. The decision to terminate pregnancy is one of the most serious decisions a person can go through. As you vote this year, please consider making sure that women struggling with these decisions have the ability to consult medical professionals that can help them make the best decision.

This appeal is typical of the pro-abortion lobby in that they are selective in the facts they quote when praising Rove v. Wade. According to their own statistics from the Alan Guttmacher Institute:

A Few interesting facts to note:
1. According to their numbers, about 1 in 5 abortions are performed on minors.

2. Notice that Rape, incest or the health of the mother are not on the list of reasons why women are ending their pregnancies.

3. Abortion advocate’s efforts to terminate of the pregnancies of ethnic minorities (blacks in particular) have been overwhelmingly successful.

I fail to recognize what there actually is to celebrate… 45 million dead babies? Black genocide? Abortion as a contraceptive? Sacrificing our daughters on the altar of reproductive choice?