“The time is now to provide justice to victims of bias-motivated violence and to re-double our efforts to protect our communities from violence based on bigotry and prejudice.”

These were the words uttered by Attorney General Eric Holder a little more than one year ago, as he sought passage of new federal hate crimes legislation. What he didn’t say was that he wasn’t referring to all “bigotry and prejudice” especially if it was aimed at whites. Case in point: the Justice Departments refusal to prosecute the New Black Panther Party members who stood outside a polling place, brandishing weapons in an attempt to intimidate white voters during the 2008 presidential election.
This dismissal was so egregious that Former DOJ attorney J Christian Adams who actually worked on the case resigned as a result of it. He recently wrote a commentary in the Washington Times outlining his objections to the Obama Administration’s handling of the case: 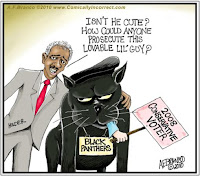 On the day President Obama was elected, armed men wearing the black berets and jackboots of the New Black Panther Party were stationed at the entrance to a polling place in Philadelphia. They brandished a weapon and intimidated voters and poll watchers. After the election, the Justice Department brought a voter-intimidation case against the New Black Panther Party and those armed thugs. I and other Justice attorneys diligently pursued the case and obtained an entry of default after the defendants ignored the charges. Before a final judgment could be entered in May 2009, our superiors ordered us to dismiss the case.

The New Black Panther case was the simplest and most obvious violation of federal law I saw in my Justice Department career. Because of the corrupt nature of the dismissal, statements falsely characterizing the case and, most of all, indefensible orders for the career attorneys not to comply with lawful subpoenas investigating the dismissal, this month I resigned my position as a Department of Justice (DOJ) attorney.

Keep in mind that these are the same folks who declared that black should “…kill some cracker babies…” I wonder if this case would have been handled the same way if the perpetrators had been flag waving Tea Partiers? I doubt it.
Justice is supposed to be blind. But in this case, it is blind as a bat!