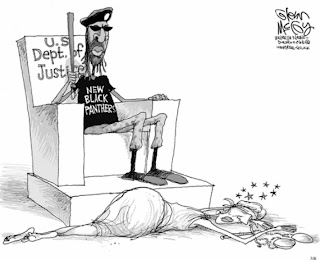 Today, the National Association of Colored People’s National Conference voted to approve a resolution that accuses the Tea Party Movement of “blatant racism”, while at the same time ignoring voter intimidation by their friends in the New Black Panther Party and a violent hate crime by their friends from SEIU.

As a part of their national campaign to regain some semblance of relevance again the NAACP has taken to attacking the most relevant political movement today, the Tea Party Movement. Keep in mind that this is the same NAACP that is pushing to legalize pot and make Neverland Ranch a State Park in California. And they have the nerve to claim that no one takes the Tea Party seriously?

If they truly wish to denounce “racism”, why don’t they put forth a resolution denouncing the blatant racist thuggery and voter intimidation of the New Black Panther Party who brandished pipes as they stood outside a polling place in Philadelphia? Furthermore, why won’t they call on the White House to prosecute them to the fullest extent of the law?

Or maybe we can get the NAACP to encourage prosecution of the those who are guilty of the only violent hate crime ever committed at a Tea Party? But then again that would mean turning against their friends at SEIU who brutally attacked a Black man at a Tea Party Rally last year calling him the “N” word repeatedly. Instead the Missouri NAACP chose to hold a press conference supporting those who were guilty of the hate crime.

Sounds to me like the NAACP is desperately trying to overcome it’s irrelevancy by attempting to tear down a movement that is actually making a positive difference in this country.

This comes right out of the NAACP playbook: If you can’t beat’em, call’em racist!