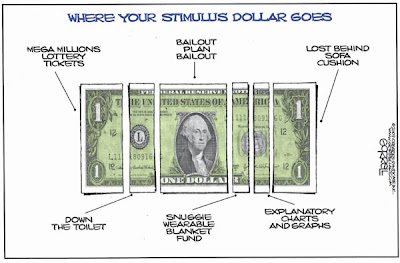 And My brother David wonders why Republicans are scoffing at this pork barrel spending bill, that is only meant to stimulate the money out of the pockets of hard working Americans and into the pockets of liberal special interest groups like Planned Parenthood and Acorn.
David, please read what Michael Obrien with The Hill wrote about the bill’s author who, when asked about wasteful spending in the bill said “So what?”:

Waste In the Stimulus Bill? Democrat Author Says ‘So What?’

How money is spent should be far from the biggest concern about the stimulus package, its chief author, House Appropriations Committee Chairman David Obey (D-Wisc.) said Friday.

“So what?” Obey asked in response to a question on NPR’s “Morning Edition” about the perceived lack of direction from Congress as to how money in the stimulus should be spent. “This is an emergency. We’ve got to simply find a way to get this done as fast as possible and as well as possible, and that’s what we’re doing.”

Obey said that Congress is not responsible if money is misspent, but rather, whoever spends the money poorly.

“We simply made a decision, which took about three seconds, not to have earmarks in the bill,” Obey told NPR. “And with all due respect, that’s the least important
question facing us on putting together this package.”

As Chairman of the Appropriations Committee, Obey had chief oversight in crafting the $825 billion package as passed by the House. The provisions in the bill have been
criticized by Republicans and some centrist Democrats for not being as directly related to stimulating the economy as it should be.

“We have more oversight built into this package than any package in the history of man. If money is spent badly, we want to know about it so we can hold accountable the people who made that choice,” the chairman said. “And guess what? Regardless of what we do, there will be some stupid decisions made.”