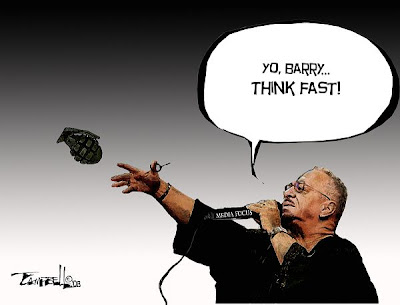 The following is from an article from the New York Post accusing Rev. Jeremiah Wright of intentionally sabotaging the presidential campaign of Barak Obama.

As I am sure you know, I have my own thoughts about this issue, But I wanted to know what Y’all thought about it before I commented. Well David? What say you?

REV-ENGE IS SWEET FOR ‘BETRAYED’ PASTOR
By FREDRIC U. DICKER State Editor

(Albany)- The Rev. Jeremiah Wright would be happy to see Barack Obama’s presidential campaign derailed because the pastor is fuming that his former congregant has “betrayed” their 20-year relationship,

The Post has learned. “After 20 years of loving Barack like he was a member of his own family, for Jeremiah to see Barack saying over and over that he didn’t know about Jeremiah’s views during those years, that he wasn’t familiar with what Jeremiah had said, that he may have missed church on this day or that and didn’t hear what Jeremiah said, this is seen by Jeremiah as nonsense and betrayal,” said the source, who has deep roots in Wright’s Chicago community and is familiar with his thinking on the matter.

“Jeremiah is trying to defend his congregation and the work of his ministry by saying what he is saying now,” the source added.

“Jeremiah doesn’t care if he derails Obama’s candidacy or not . . . He knows what he’s doing. Obviously, he’s not a dumb man. He knows he’s not helping.”

The source spoke yesterday about Wright’s motivation for thrusting himself back into the news, the day after the pastor appeared at the National Press Club on Monday and embarrassed Obama by accusing the United States of terrorism.

Wright has said the reason he has begun granting interviews and making public appearances now is that he wants to defend black churches.

But the source said the preacher’s motivation is much more personal.

The source noted that the roots of Wright’s disillusionment with Obama began last year after the Illinois senator unexpectedly yanked him from participating in the public announcement of his presidential campaign.

“That’s why Jeremiah revealed . . . that he had actually been at the [announcement] hotel and prayed privately with the Obama family before the official declaration,” the source told The Post.

“Rev. Wright, as well as other senior members of his church, believe that Obama has betrayed over 20 years of their supposed friendship.”

Obama further angered Wright by trying to distance himself from the pastor ever since videos were made public earlier this year of the preacher alleging that America brought 9/11 upon itself and that people should say “God damn America,” not “God bless America.”

The source added, “After 20 years of loving Barack like he is one of their own, after he was embraced by this congregation as a brother in Christ, after his pastor was a father figure to him and gave him credibility in a city he had not grown up in and in a black community that was suspect of someone from Hawaii and Harvard, he thanks him by not allowing him to speak publicly at his announcement last year?

“A lot of people in the church believe they were there for this man when no one else was, and a lot of people don’t believe it any more when Obama claims he loves the man who did so much for him,” the source added.

This is BS! Dicker and his “source” offer no definitive proof that the Reverend is opening his trap to purposefully hurt Obama’s candidacy. Who is this source? How is he related to Reverend Wright? For all we know, Hillary could have been the source! Just no credibility at all…..

Now, I believe the Good Reverend Wright to be an egomaniac. He is selfish and self-centered. I believe that he did what he did because he is selfish – not out of some twisted sense that Obama “betrayed” him. Remember, Obama stood by him originally; there was no denouncement of Pastor Wright – at least not until after his visit to the National Press Club and the Detroit NAACP… So why would the Reverend do the events to hurt Obama for denouncing him? And as for Obama distancing himself from Wright’s original comments or asking him not to speak at his campaign announcement – I just do not believe that Wright is that dense that he cannot see the bigger picture. He does what he does because he thinks only of himself – not about Barack, the Country or the Church. This consipracy theory just does not add up.

Honestly, I was okay with the bulk of Rev. Wright’s prepared remarks to the National Press Club. He was speaking a very harsh historical truth to an audience that, at times, was egging him on with their positive replies to the Reverend’s ‘call and response’ techniques. He explained that in the sermon which has been the source of all this controversy (the “God Damn America” quote), he was actually quoting someone else. However, this dude then goes on in the Q and A to basically repeat the charges that America brought 9/11 on itself. SHUT UP! SHUT UP MAN!

I am glad that Obama distanced himself from him. It was time, and it is necessary.